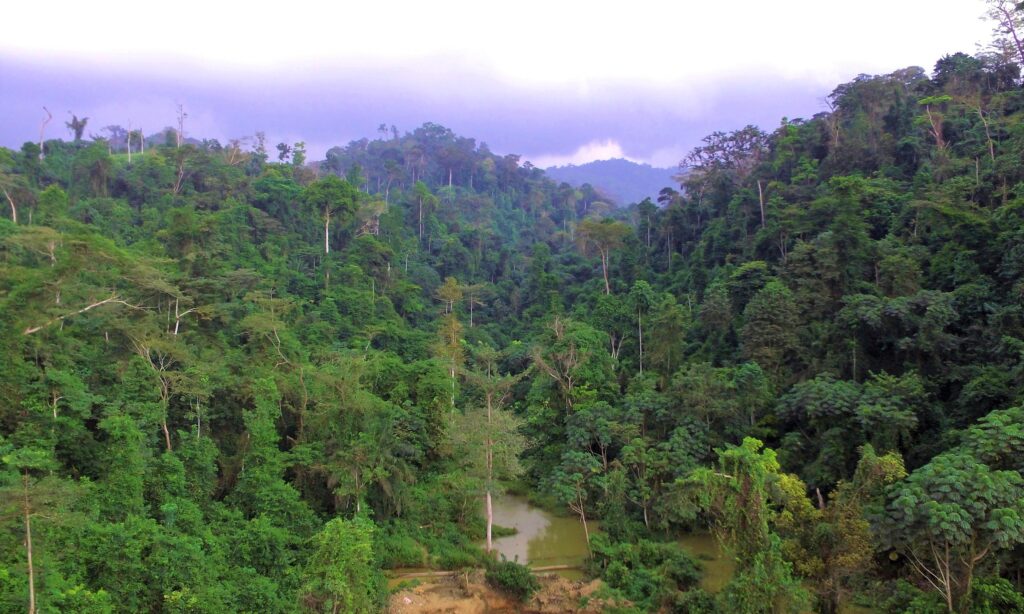 The project is aimed at protecting the Atewa Range Forest Reserve

A Rocha Ghana (ARG)  has initiated a project, funded by the Critical Ecosystem Partnership Fund (CEPF) aimed at protecting the biologically rich Atewa Range Forest Reserve from current threats of illegal mining, the government’s intended bauxite mining plan and other forms of degradation.

The main objective of the project is to strengthen the protection of Atewa Forest through: establishing regular community monitoring and reporting of illegal and damaging activities; and assessing its biodiversity to confirm Atewa’s Key Biodiversity Area status which was adopted on the basis of it being an Important Bird and biodiversity Area.

The project dubbed “Protecting Atewa Critical Ecosystem through Biodiversity Assessments and Participatory Monitoring” was officially launched on March 30, 2021 at the Atiwa West District Assembly – Kwabeng in the Eastern Region of Ghana.

The inception meeting brought together all stakeholders to inaugurate the project, discuss project activities with expected deliverables, and to collaboratively agree a way forward towards successful project delivery. 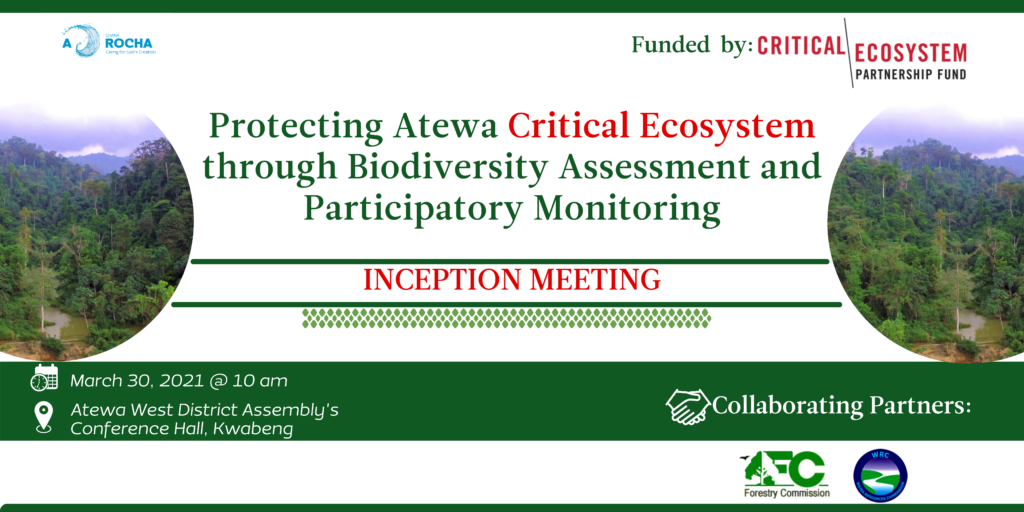 Collaborating partners onboard this project are; the Forestry Commission (FC), Water Resources Commission (WRC), the Ministry of Environment Science Technology and Innovation (MESTI) and the Key Biodiversity Area (KBA) Secretariat.

A Call for sustainable use of Forests 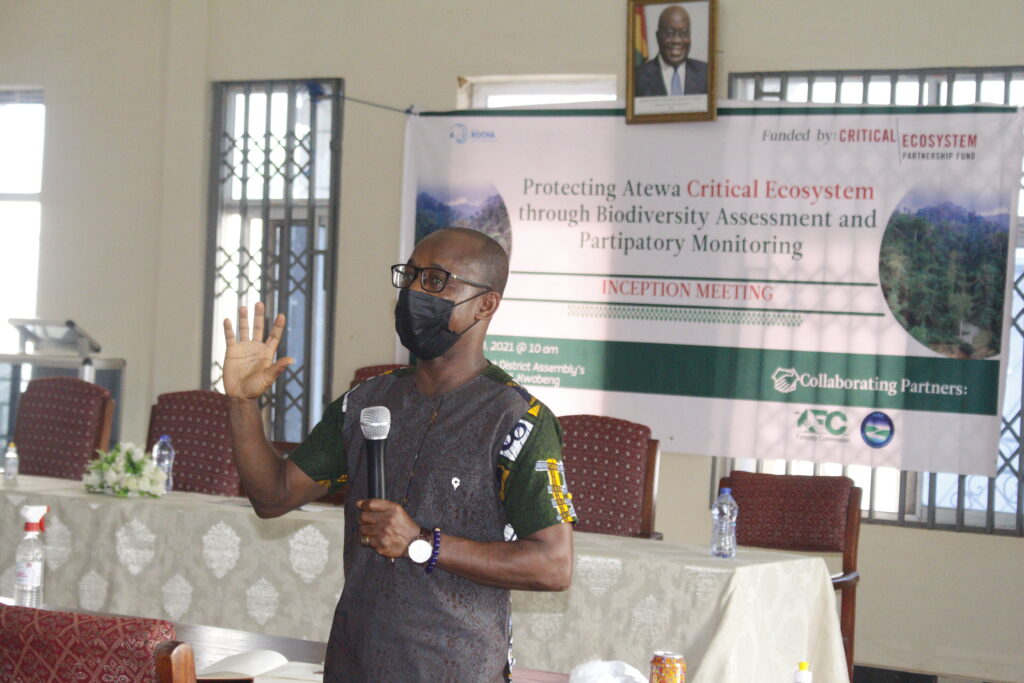 Dr. Seth Appiah-Kubi, National Director for ARG in his opening remarks encouraged stakeholders to continue the fight for the forest to be made a National Park which will in turn safeguard the biodiversity of the Atewa Forest and assure prosperity for all.

According to him, the current attempt to mine bauxite in the Atewa Forest is the 12th attempt by successive Governments.

“Some people have ensured the preservation of the forest reserve from the first time an attempt was made to mine it. I feel it is now our turn to continue to resist government’s plans to mine the forest and advocate for a National Park which will benefit generations today and posterity, and still maintain the integrity of Atewa Forest,” Dr Appiah-Kubi said. 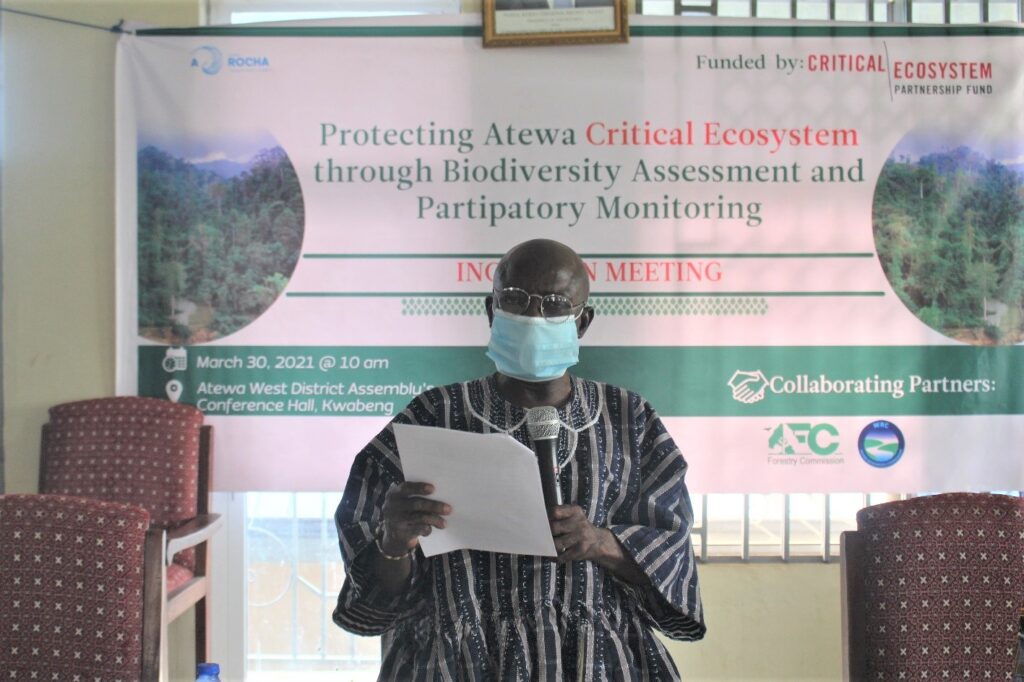 In the same vein, the District Chief Executive for Atiwa West, Hon. Isaac Akomaning Asamoah who was also Chairperson for the event, threw his unflinching support behind the project by calling for a sustainable use of the Forest Reserve and urged the FC to strengthen the protection of the Atewa Range Forest Reserve.

Mr. Emmanuel Nkwantabisa who is the Deputy Eastern Regional Manager of the Forest Service Division also called for community support in the fight against illegal chainsaw, illegal farming, and illegal hunting in the Atewa Forest Reserve adding that the “FC cannot manage the forest alone.”

He iterated that it is for such reason the Commission deems it fit to collaborate with ARG to push the agenda of collaborative natural resources management as proposed by the project.

The Densu Basin Manager of the Water Resources Commission, Dr. Ronald Abrahams encouraged participants to stand up to protect their rights to clean safe water and also be responsible for the protection of their water sources from being polluted by illegal mining operations. 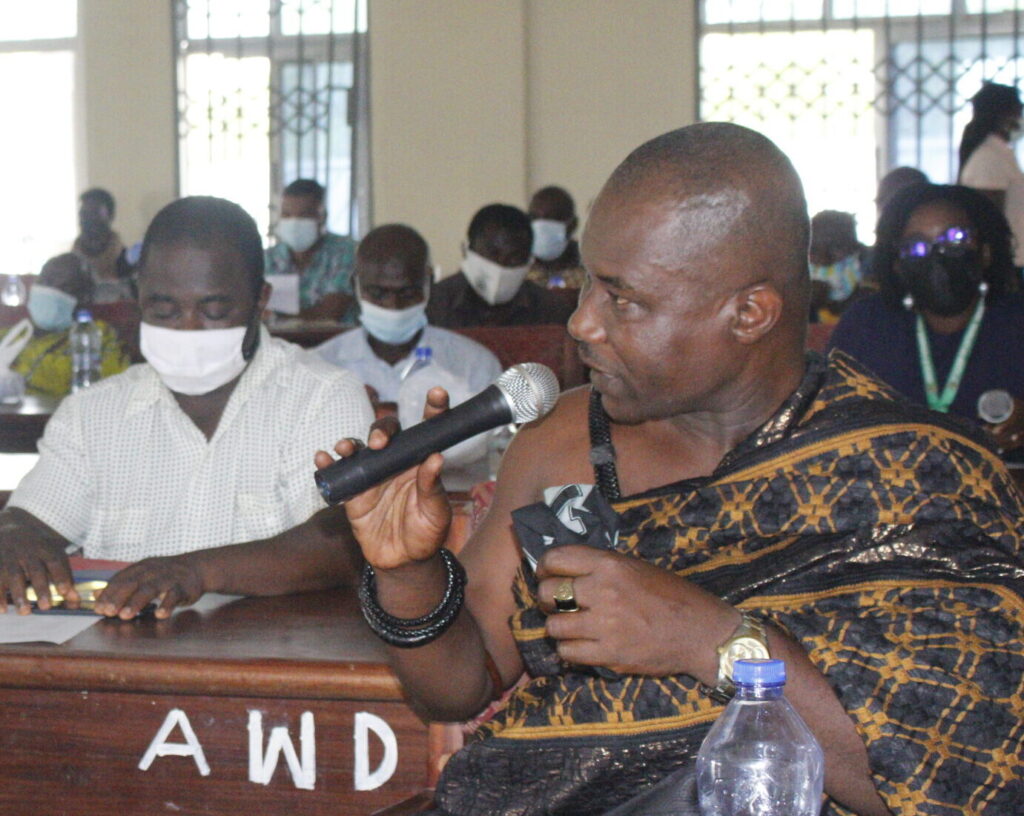 Barima Kurupi Botuo, Chief of Sagyimase expressed his joy on the initiative to include community support in forest management. He advised that degraded areas should be re-afforested.

Barima Botuo also hinted that the Okyehene has admonished all chiefs to see to it that all un-reclaimed mined-out lands within their jurisdictions are reclaimed by the community.

The project is being funded by CEPF, a fund that enables civil society to protect the world’s biodiversity hotspots—biologically rich ecosystems that are essential to humanity, yet highly threatened.

With financial and technical support from CEPF, civil society organizations around the globe are delivering innovative solutions that conserve biodiversity and help communities thrive. 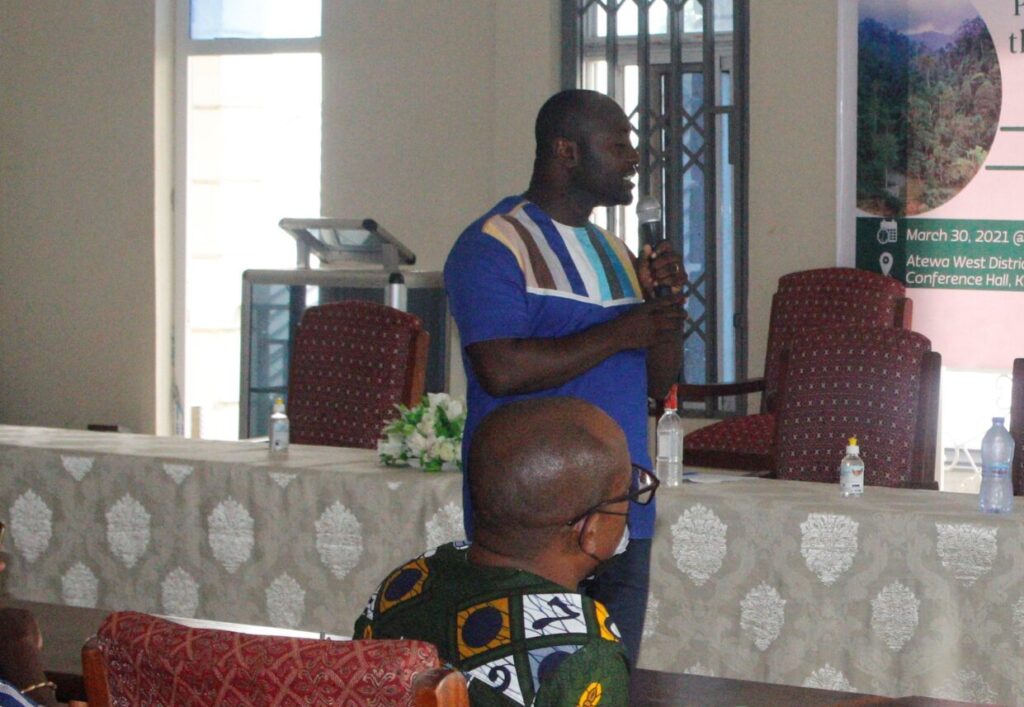 Presenting the project details to participants, Projects Manager of ARG in Eastern Region, Mr. Theophilus Boachie-Yiadom, extended appreciation to the CEPF for funding the project and detailed out all expected deliverables and the planned activities to meet them.

Aside developing an innovative participatory monitoring system for sustainable management of critical ecosystems, the project will see to it that the evidence required for confirming the designation of Atewa as a Key Biodiversity Area (KBA) is established. 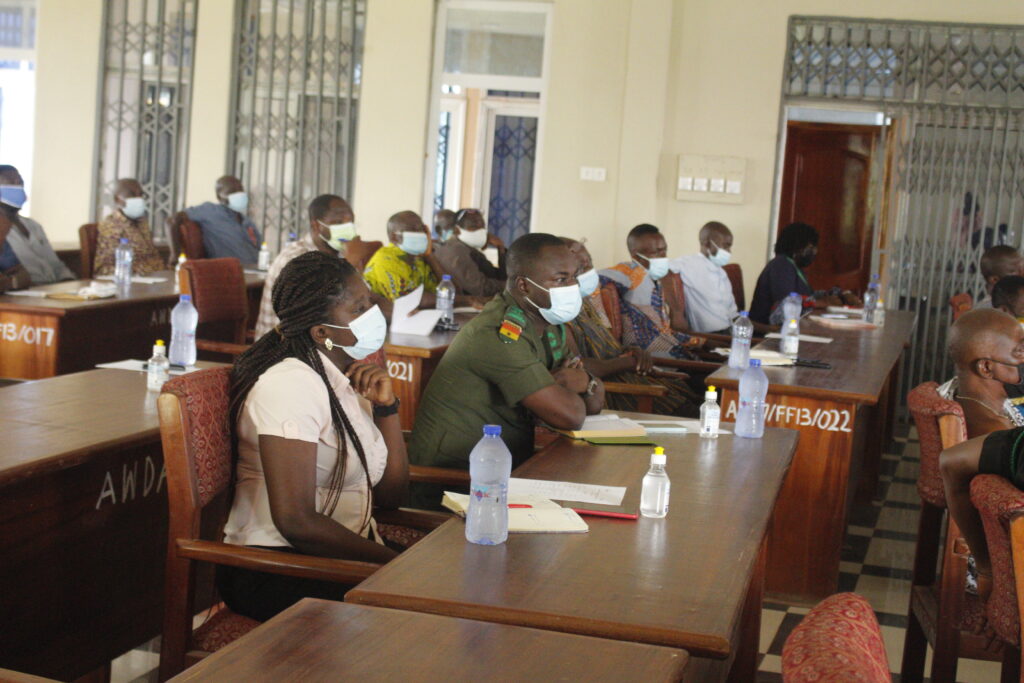 A cross-section of participants

This will be done by assessing Atewa against the new Global KBA Standard. To achieve this, the project will undertake surveys of key trigger species to provide the necessary biodiversity data for the assessment.  The trigger species are selected from those listed as most endangered on the IUCN Red List of Threatened Species and may include, for example, the Yellow-bearded Greenbul Criniger olivaceus (Vulnerable, VU), the Atewa Dotted Border butterfly Mylothris atewa (VU), Togo Slippery Frog Conraua derooi (Critically Endangered, CR) and other trigger species identified during the scoping exercise.

The assessment will also focus on key geographic priority areas such as streams and wetlands inside the proposed bauxite mining area in the northern range of the Atewa Forest.

Results from the assessment will later on be fed into the Ghana National Biodiversity Strategy and Action Plan (NBSAP) review.