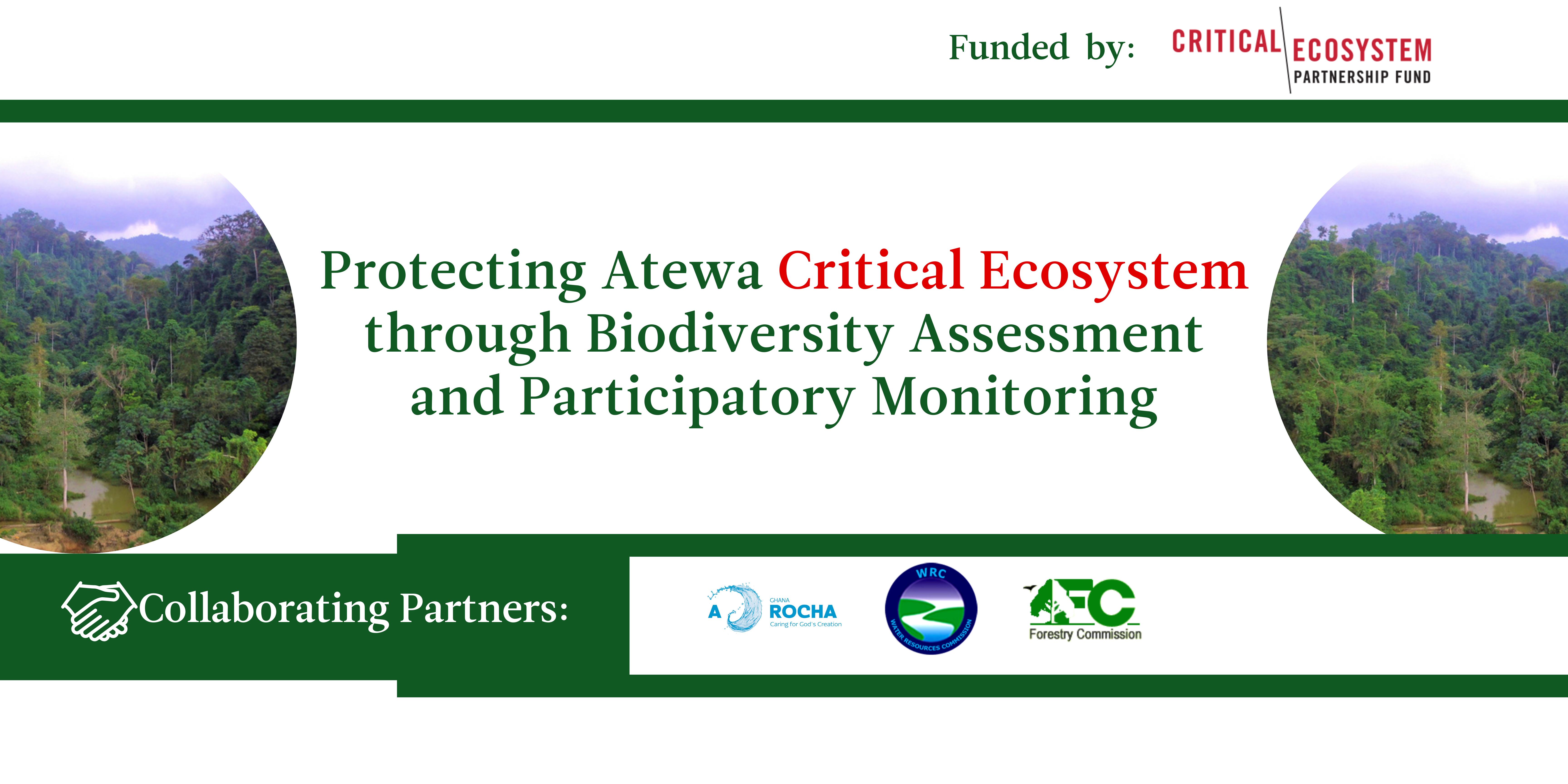 Key Biodiversity Areas (KBAs) keep nature thriving and are some of the most important places in the world for species and their habitats. Unfortunately, most of these areas are faced with several threats hence, the need to focus collective efforts on conserving the places that matter most—places like the Atewa Range Forest Reserve.

A Rocha Ghana (ARG) with funding from the Critical Ecosystem Partnership Fund (CEPF) is ensuring that the biologically rich Atewa Range Forest Reserve is protected from current threats of illegal mining, the government’s intended bauxite mining plan and other forms of degradation. 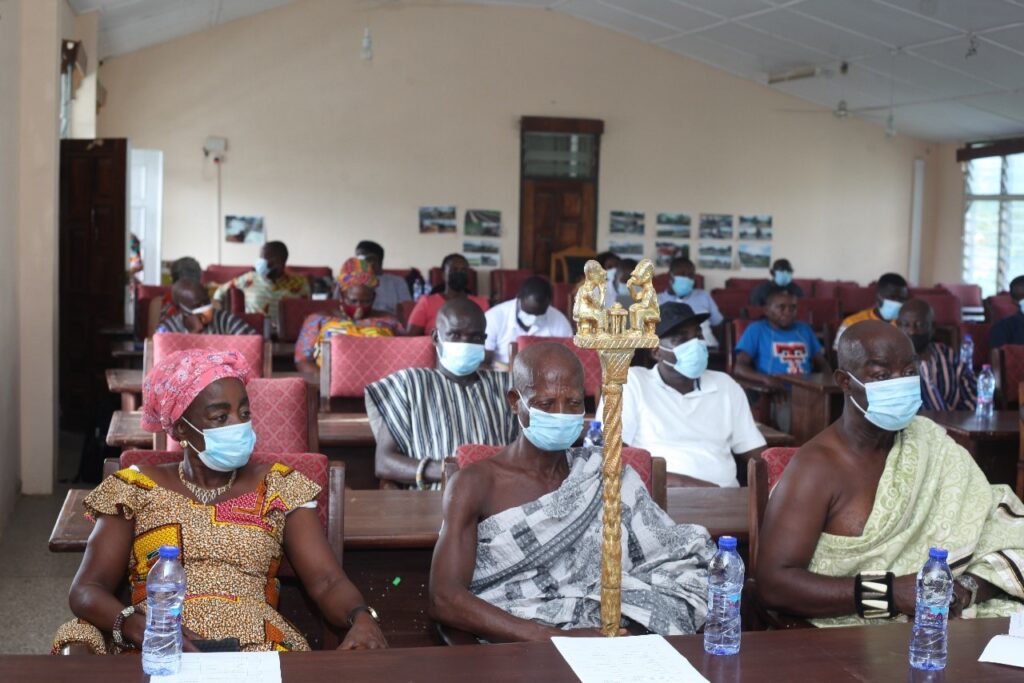 A cross section of participants

In view of this, field studies were undertaken on potential trigger species as part of an assessment process to validate Atewa Range Forest Reserve’s current status as a KBA, a designation which was assigned on the basis of its status as an Important Bird and Biodiversity Area (IBA). The assessment was done using the KBA Global standards as a guide.

As part of the activities under the CEPF funded project dubbed “Protecting Atewa Ecosystems through Biodiversity Monitoring and Participatory Approach”, a one-day validation meeting was held to confirm the findings of expert scientist consultants who assessed the population status of various species such as Birds, Primates and Amphibians against the Key Biodiversity Area Criteria.

This project action is aimed at strengthening the knowledge base for Atewa Range Forest Reserve’s designation as a Global Key Biodiversity Area. 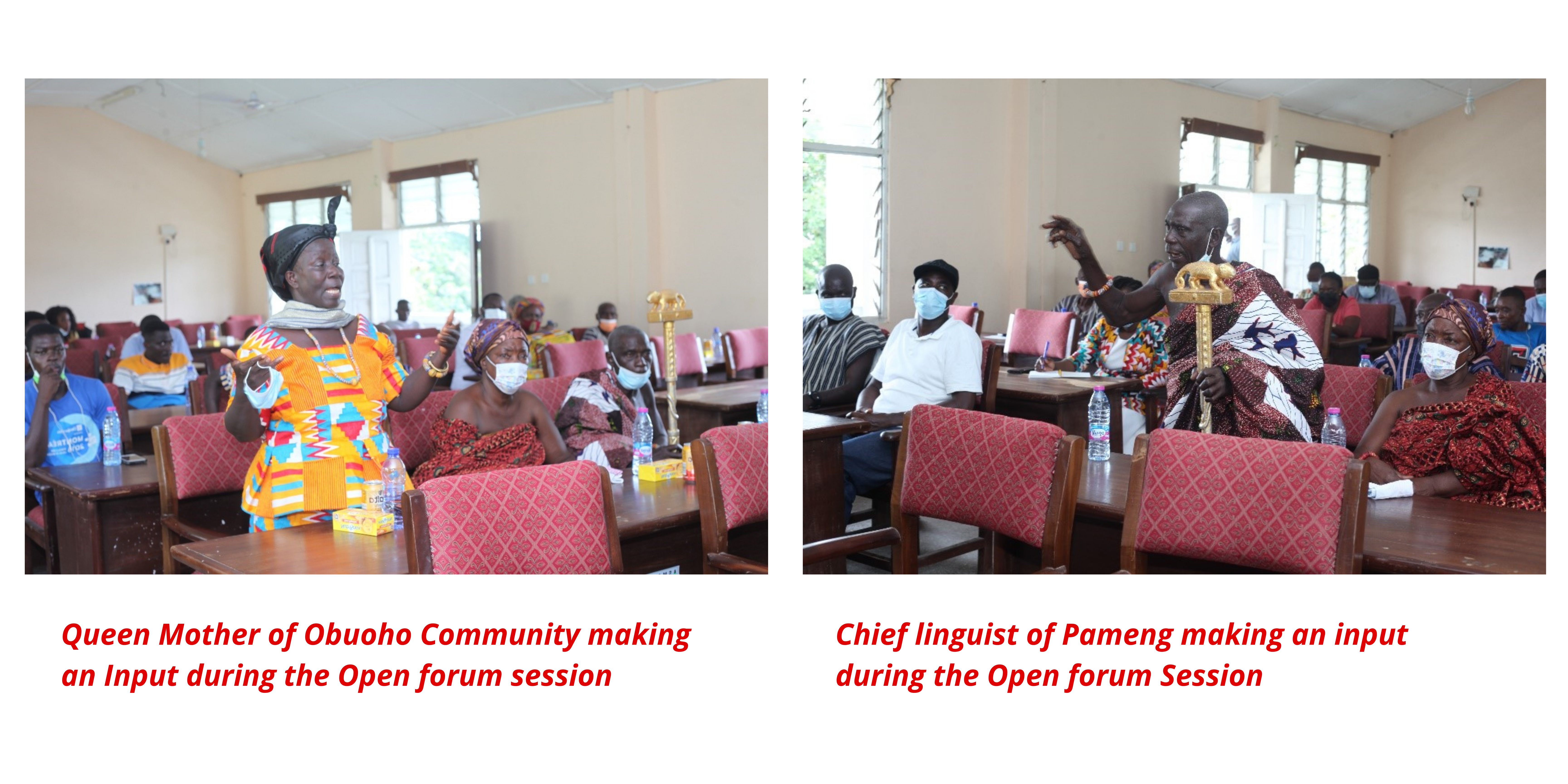 The meeting which took place on November 10, 2021 at the Abuakwa South Municipal Assembly Hall, in the Eastern Region of Ghana brought together over 35 participants including three experts from the Kwame Nkrumah University of Science and Technology (KNUST) tasked to undertake field studies on some trigger species in the Atewa Forest. 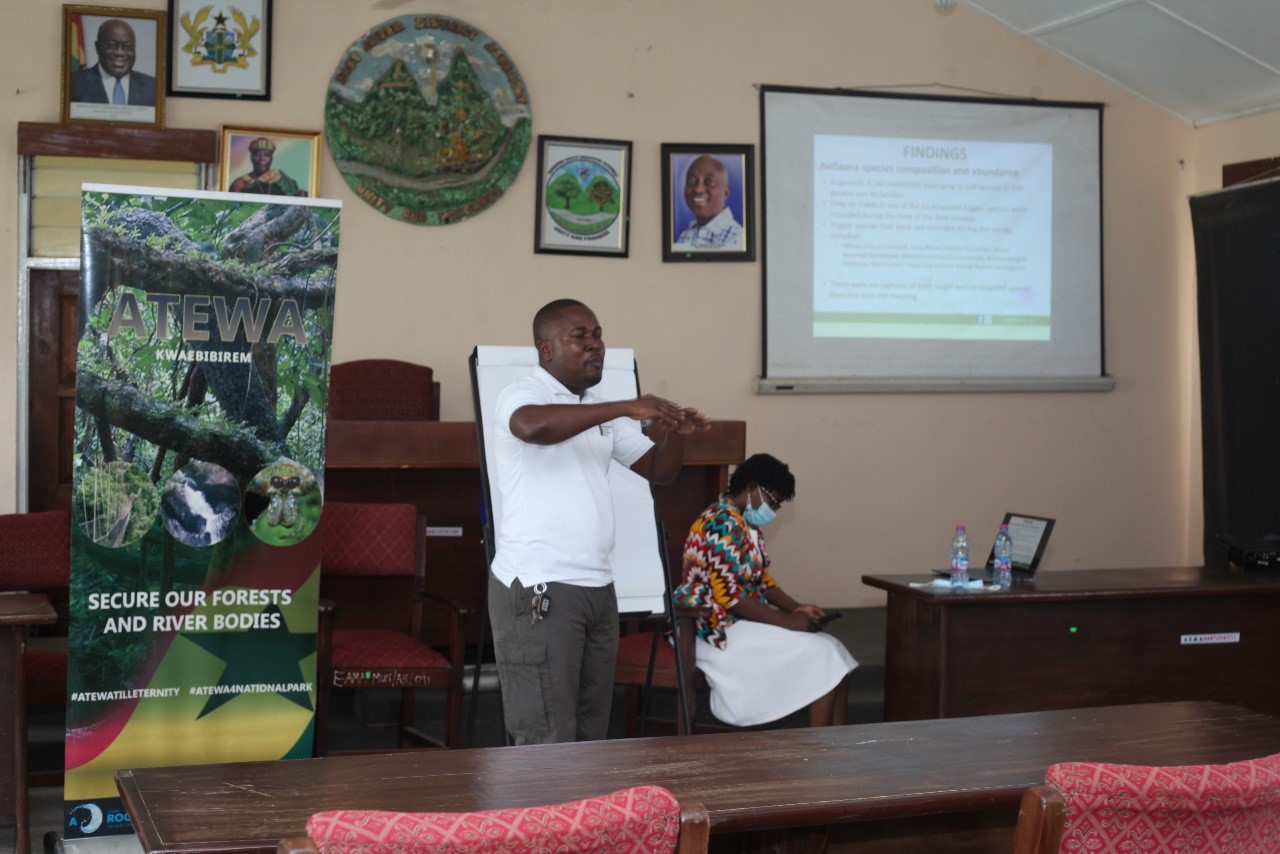 Mr. Nutsuakor Mac Elikem Kwabla – ornithologist making a presentation on the status of Birds within the Atewa Range Forest Reserve

On the state of birds in the forest as against the KBA criteria, Mr.  Nutsuakor Mac Elikem Kwabla said six out of the 13 proposed trigger species were recorded during the time of the field surveys. These species are: Yellow-bearded Greenbul – Criniger olivaceus, Brown-cheeked Hornbill – Bycanistes cylindricus, Green-tailed Bristlebill – Bleda eximius, Sharpe’s Apalis – Apalis sharpie, Copper-tailed Starling – Hylopsar cupreocauda and the Blue-moustached Bee-eater – Merops mentalis. The 6 species met the B3 criterion under the KBA standard.

Dr. Bright Kankam, indicated that one primate species— Colobus vellerosus – out of six met one of the criteria, KBA A1 sub criterion. However five (5) species ( Lowe’s monkey Spot-nosed monkey White-thighed colobus monkey Diana monkey Olive Colobus White-napped Mangabey) out of the 6 species qualified for the minimum threshold of attaining a KBA status.

Findings from experts on the state of species in the Atewa Forest confirms the forest hold species with a minimum threshold to trigger Atewa’s status as a Global KBA. 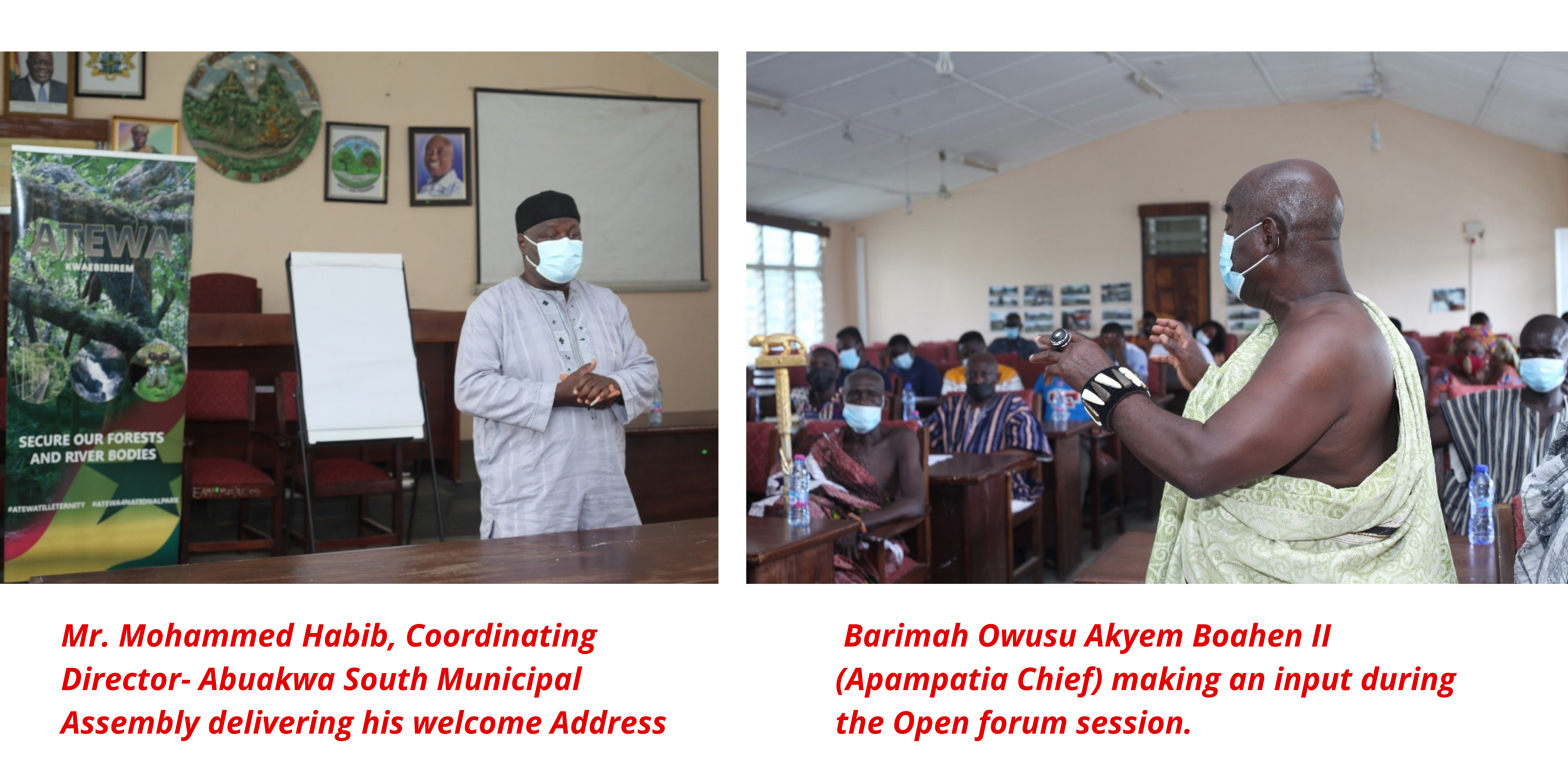 Delivering an opening remark, Mr. Mohammed Habib, Municipal Coordinating Director for the Abuakwa South Municipal Assembly called for collaborative effort to preserve the Atewa Forest. According to him, the forest is a precious jewel due to its numerous ecosystem services support and must not be taken for granted.

Barimah Owusu Akyem Boahen II (Apampatia Chief) commended the good work being championed by A Rocha Ghana and called on the Government of Ghana to make the forest a National Park in order to safeguard the water resources of the forest.